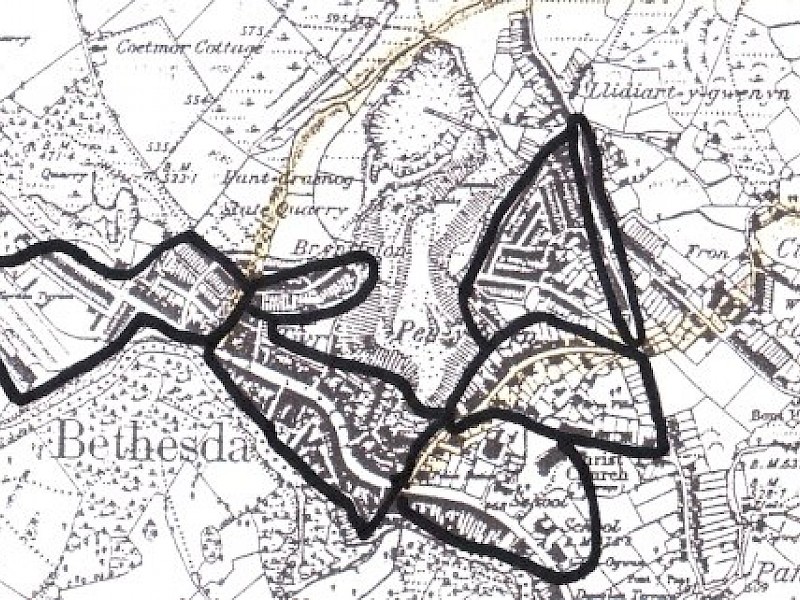 Picture: Bethesda Village in 1890 showing different parts of the village following the developments of the period, Llais Ogwen.

Bethesda in North Wales is celebrating its bicentenary this year (2020).

This article by the historian John Llywelyn looks at some of its rich history over the last two-hundred years.

This article has been translated from Welsh. The original article can be found here, along with many more about the history of Dyffryn Ogwen, as well as additional maps and photographs.

It was also published in Llais Ogwen, the Welsh Language monthly paper for Dyffryn Ogwen.*

The layout of villages is remarkably similar to a jigsaw, with each section interwoven to create the whole installation.

In Bethesda, the dynamo that drove development of the village throughout the nineteenth century was the Penrhyn quarry, which grew into one of the largest slate quarries in the world. The side effect of that was of course an increasing demand for accommodation for its workforce.

Before there was a village in Bethesda, there were two paths running through the parish of Llanllechid. The first ran from Llanllechid to Carneddi and served a number of smallholdings on the valley floor including Penybryn, Garneddwen, Pant y Ffrydlas and Abercaseg.

The second route extended from Coetmor to Gochwillan and joined the first at Penybryn. Both routes offered a framework for the earliest developments of the future of the village, and the linear pattern of the first houses from the Moorsgate to Capel Carneddi can be attributed to the pre-construction period of the chapel in 1816.

The construction of the Telford Post road in 1820, which involved opening up access to a large plot of land between Tower Bridge and Pandy Bridge, the majority of which is independently owned by the Penrhyn estate, was key to Bethesda’s development.

This may have come as a bit of a surprise to Thomas Telford!

A few years earlier in 1794 Owen Ellis, a wealthy farmer and lessor of the large farm of Cefnfaes east of Talybont, had bought a small Cilfoden Isaf smallholding for £ 735 without realizing that this steep and rocky strip would be developed into the central nucleus of the village from 1820 onwards.

It extended land from Carneddi Road in the east to the banks of the Penrhyn estate in the south. The nucleus was developed in two parts with the western section forming the high street following the Telford road and the eastern part leading to the construction of a number of uniform and poorly constructed working-houses rows in the Brynteg and Carneddi area.

Between them, an intrusive industrial scapegoat, the Pantdreiniog slate quarry with its unstable spoil heaps and its intimidating deep hole overwhelmed the development of the nucleus as a unified town center.

The High Street became the main marketing center of the village and on its outskirts a small industrial estate at Cae Star grew. On the old track from Coetmor a street of Bryntirion working houses developed and in the shadow of the high street developed the uniform terraces of Penygraig, Tower and Glanrafon, and all developments were sold or leased by the Ellis family of Cefnfaes.

In 1854 the Bethesda Improvement Act was authorized by law and several of the area's dignitaries were elected to form Bethesda's Improvement Commissioners, a council for the village, chaired by Lord Penrhyn.

He contributed £1000 towards improving the village's services and plans were put in place for the supply of drinking water, sewerage, gas and lighting to the village. The act also meant the introduction of improved house building standards and highlighted the shortcomings of the unsightly terraces on the Cefnfaes estate.

More or less in keeping with the new standards, the elegant Ogwen Terrace terrace was built to adorn the south entrance to the village and to extend between Bethesda chapel and the Douglas Arms hotel. This was a development on the Penrhyn land and central to it was the imposing Jerusalem chapel built in 1841 on one side of the road and the Glanogwen church built in 1856.

Another significant development dating from this period was the purchase of the old Coetmor estate in 1855 by the Penrhyn estate, making it a yet more powerful force, encircling the original independent nucleus.

From then on all the most significant developments of the rest of the century were to take place through the patronage of the Penrhyn estate.

The old Penybryn farm was the focus of the next troubled development in the history of the Ogwen Valley. In 1864 industrial relations at the Penrhyn quarry were quite fragile and this led to a week-long strike in August of that year.

It may have been a coincidence that a letter appeared in the press the following December praising the generosity of the First Baron of Penrhyn in building houses of a special standard for the inhabitants of the village. The letter refers to the ambitious planned development of a triangle of semi-detached houses and associated gardens which surrounded the old farm on either side of Penybryn hill and at Garneddwen and Pantglas Road. The robustness and freshness of the houses provided an illuminating contrast to the grey harshness of Brynteg and its environs.

The next stage in the development of the village was to design a more elaborate access to the north end of the high street. The key impetus was the construction of a substantial train station in 1884 as a terminus for the LNWR national railway on the rubble tips of the former Bird's Lodging slate quarry. As at the beginning of the century when Bethesda was first connected with a national highway, so too at the end of the century was the village united with a transport system that was as vital to its economic prosperity as its social image, an important psychological link. This was something members of the Local Board struggled to realize for many years.

This led to the construction of a number of new housing terraces on either side of the highway and to the most prestigious terrace of them all, Perhyn Terrace, which would be as worthy an introduction to the High Street as its similar counterpart Ogwen Terrace at the other end of the village.

At the end of the century one administrative change in the village's history occurred when Bethesda Civic Council was established in 1895 to replace the old Local Board. It was this body that authorized the most important developments of the following century.

One of the earliest developments of the century was the opening of a new route running from the post road near the Penrhyn Terrace to Coetmor and the direction of Hen Barc in the east. Coetmor New Road was the gateway and provided the first access to the County School and W. J. Parry's home at Coetmor Hall.

By the fifties and forties it facilitated the development of private and social housing estates at Coetmor and Maes Coetmor.

Similar developments occurred on the flood plain of the rivers Caseg and Ffrydlas at the southern end of the village, in those parts of the area that, geographically, would be far more suited to the location of the village unless social reasons were to centralize the development on the independent, yet more physically demanding site of the Cefnfaes estate. On the plateau the fields of the former smallholdings of Garneddwen, Pant Ffrydlas and Abercaseg were abolished and built on the Adwy'r Nant council estates in the thirties and later in the fifties large estates at Glanffrydlas and Glanogwen.

Probably the most important development of the last century was the decision of the then Welsh Office to finance the relocation of the entire Pantdreiniog quarry from the village center. The scheme was completed during the sixties and it was desirable to remove the unsightly roundness of the tips and the pit hazards yet the clean-up left a wilderness almost as untidy as its industrial predecessor in the center of the village. The task of 21st century planners will be to renovate a more appropriate focal point for the village of Bethesda than the derelict pasture on the site these days.

Although Bethesda as it stands came about by virtue of the British Empire's intention to strengthen its hold on its empire by strengthening its link with Ireland, and for the village to develop to a degree after slavery, one of the most unhealthy chapters of the Empire, it is a matter of pride that Bethesda is a Welsh village and valley two hundred years established.

It is the responsibility of us, all present residents from around the world to take every opportunity to protect our language, culture and environment and to ensure that we are responsible for the development of Bethesda and the Ogwen Valley for our own benefit.

Why not start by celebrating Bethesda's bicentenary before the end of 2020 ?!